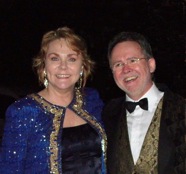 Here are the bios for the two wonderful soloists who will be performing with us in the December concert! Please, join us on December 3 to hear Ghillian Sullivan sing and see Ian Cook guest conduct the CCO!

After many years singing leading roles in European opera houses, Ghillian became a popular leading lady with Opera Australia, at the Sydney Opera House, state companies, and the ABC Orchestras.

Ghillian began her career at Glyndebourne in England, where she sang with leading conductors of the day, then moved to Germany to sing in many opera houses including Koln, Wiesbaden, and further afield in Paris, Moscow, Leningrad and Kiev.

She has over 40 major roles in her repertoire, among them La Traviata, Lucia, Mimi, Gilda, Donna Anna, Donna Elvira, Konstanze, both Susanna and Countess Almaviva, Leila in Pearlfishers, Adina in The Elixir of Love, Rosalinde in Die Fledermaus, Marguerite in Faust, The Governess in The Turn of the Screw, and others by Richard Strauss, Wagner, Handel, Kalman and Lehar.

In addition to his work at The Conservatorium, Ian is actively involved with guest conducting and workshops relating to wind bands. His other interests include music- theatre and opera. Ian’s repertoire includes The Magic Flute, The Marriage of Figaro, Don Giovanni, Cosi fan tutte, La Belle Hélène, HMS Pinafore, The Pirates of Penzance, The Mikado, The Merry Widow and Sweeney Todd. In 2008 he conducted the Australian premiere of Leonard Bernstein’s Wonderful Town, for Newcastle Festival Opera. For the 30th anniversary of the creation of The University of Newcastle Wind Orchestra, Ian presented the Australian premiere of the exhilarating Queen Symphony in 2009. In 2010 he conducted Kurt Weill’s The Threepenny Opera and La Boheme. The year concluded with a wind orchestra arrangement of Carl Orff’s Carmina Burana with the Newcastle University Choir. Earlier this year he conducted The Gondoliers and in July this year Ian fulfilled a long held dream to conduct Leonard Bernstein’s Candide.  Ian is very pleased to be here in Cincinnati and being able to share the concert platform with long time friend and colleague Dr Gerry Doan.

The CCO May Concert has been canceled due to the COVID-19 Pandemic.

Every concert is free, but we appreciate your donations!


Thank you for supporting the CCO!